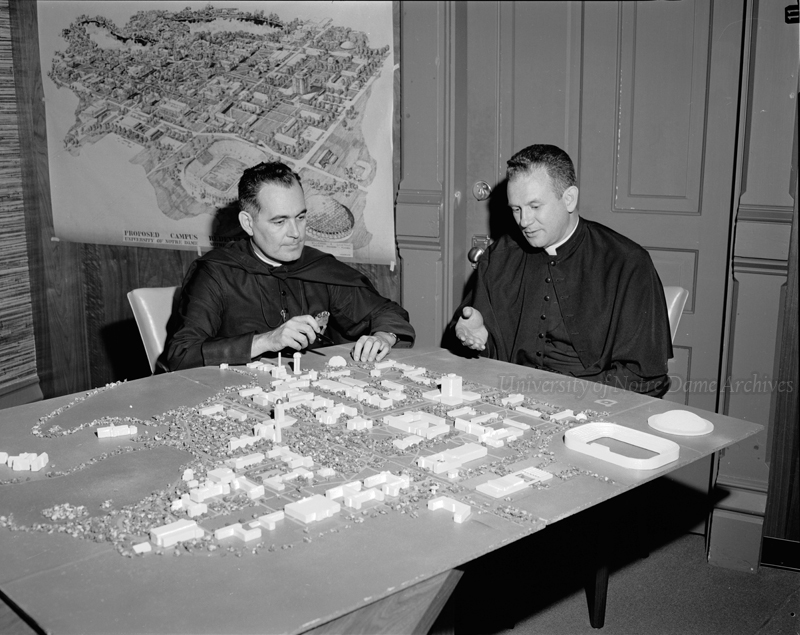 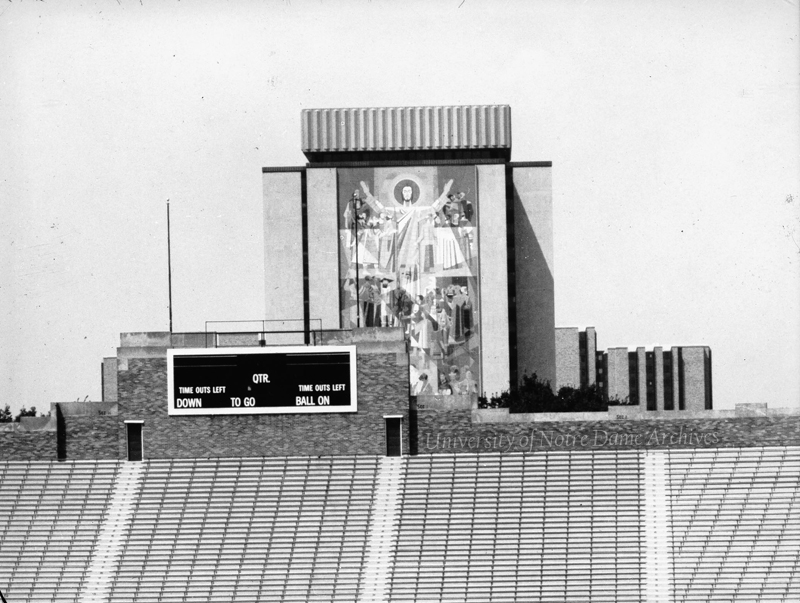 Within a few years of its debut, the Mural of Life took on an entirely different meaning. The placement of the mural directly in line with the end of the football stadium was purely coincidental; however, many fans would claim the stadium as the ideal vantage point from which to view the mural. It didn't take long before someone looked out from the stadium through the goal posts and saw Jesus' arms extended as though gesturing for a field goal. Soon after, supposedly coined by a member of the student body, it affectionately became known as "Touchdown Jesus," and this is the name, for better or worse, that will live on in most people's memories. Though the alignment with the goal posts hadn't occurred to Father Hesburgh, he thought it "a nice, friendly, familiar name for this beautiful piece of art."

In 1987, Father Hesburgh retired after 35 years as president of the University of Notre Dame. That same year, the Memorial Library was renamed in his honor. "On my return, I found my old office desk, my books, and, best of all, my secretary of almost forty years, Helen Hosinski, moved to the thirteenth floor of the newly named (I tried to avoid it) Theodore M. Hesburgh Library." He had one of the best views, looking out at the Church of the Sacred Heart and Our Lady atop the Golden Dome. But retirement for Father Hesburgh, as he had indicated a few years before, did not signal an end of work. After a year of travel with Father Joyce, he returned to Notre Dame to continue his service. "Ned and I both believed that the best gift we could give to the new administration team was to disappear for a year, and then to slip back quietly and undertake some unobtrusive, nonadministrative tasks that might be useful to the university."

In fact, Father Hesburgh was quite busy in his retirement. He named five areas he wanted to work on in retirement: Peace in the nuclear age, human rights and justice worldwide, human development in the Third World, ecology (which he considered "the next great threat" to humanity), and ecumenism. He was on 50 various boards and advisory councils to keep abreast of developments. In addition, his days were spent attending meetings with alumni, giving lectures around the country, and when back, answering mail, taking phone calls from colleagues and friends, writing, counseling undergraduate and graduate students, offering daily Mass in his chapel or at various residence halls on campus, praying the Breviary, and receiving visitors. Nearly until the very end of his life (up until two weeks before he passed away), Father Hesburgh worked from his office on the thirteenth floor of the library and celebrated Mass in his private chapel every day.

As Father Hesburgh envisioned, the library's collection of well over three million volumes is growing steadily in order to meet the needs of students, faculty, and researchers. Besides the main library, there are nine other libraries on campus in areas such as business, law, engineering, architecture, and radiation research.

The main library houses numerous foreign language collections, collections on Catholicism, Latin American studies, Byzantine studies, Irish studies, a number of special collections, including a very fine Dante collection, and two thousand volumes by or about G.K. Chesterton. The library has microfilm from the Ambrosian library of Milan, gifted to Father Hesburgh and the University by Cardinal Giovanni Battista Montini (Pope Paul VI) in the 1960s, which includes Medieval and Renaissance manuscripts and drawings by European artists from the 1300s to 1800s. Another special collection is Father Hesburgh's personal library, including books dedicated or signed to him. The libraries contain the Joyce Sports Research Collections, which includes thousands of books, 18th century magazines, and collectibles, as well as records of the South Bend Blue Sox, the all-women professional baseball team of the 1940s and 50s. The Department of Rare Books and Special Collections houses clay tablets from 3000 B.C., manuscripts from the Middle Ages, American Civil War-Era correspondence, and modern-day volumes.

The University of Notre Dame Archives is responsible for the preservation of the University records deemed to be of enduring historical value, as well as records of students, faculty, staff, alumni, and donors, campus activities such as athletic events, theatre and music performances, commencements, and liturgies, as well as Notre Dame publications. Besides University records, the Archives also holds one of the largest research collections of manuscripts documenting the Catholic Church in America, including religious orders, higher education, religious movements, and numerous Catholic publications. Thousands of photographs pertaining to University life and history, and the activities of Catholics in America, as well as a trove of audiovisual materials are also part of the collections. Father Hesburgh's extensive papers, including publications, speeches, University and personal correspondence, photographs, awards, and memorabilia created or amassed through his presidency at Notre Dame and beyond are appropriately housed in the University Archives as well.

Many changes have occurred since the library first opened in 1963. Flood lights were added in 1965 to illuminate the mural at night, security was upgraded with the addition of checkpoint systems, and in 1981, the College Library and Research Library combined. In 1987, an online catalog replaced the physical card catalog, and a computer lab opened a year later. The preservation department was established in 1993, and two years later, the first library website launched. In 2013, the Center for Digital Scholarship, with cutting-edge technologies, opened its doors on the first floor of the library.

Several sections of the library have gone through renovations and refurbishments. Today one can stop in the Au Bon Pain café, or relax in the beautifully renovated courtyard with newly planted trees and benches or just beyond by the now-towering trees that surround the reflecting pool.

During the library's 50th anniversary in May 2014, a large scale renovation was announced. According to the renovation website, "The focus will be on a bold and total space transformation that creates connections among scholars, services and resources; enhances teaching and research; and inspires learning and discovery for Notre Dame students and faculty in the digital age."

Another time, as I started to say, when he was at the Morris Inn, he said, "What are you up to now?" I said, "I'm trying to get a library built." I remember we left the Morris Inn and I was driving down Notre Dame Avenue towards the Dome. He said, "Where are you going to put it?" I said, "Over there," and I pointed to where the library is. He said, "What's it going to cost?" I said, "About twelve and a half million, I hope." He said, "How much money do you have towards it?" I said, "I don't have anything right now, but we've got to have it. We're going to build it. And I'm hopeful to get three or four million ... We hope to get three or four million from the Ford Foundation and eight million from this next drive and that ought to take care of it. But at the moment I'm bare-back." He said, "Well, you ought to have something you can start with. I'll give you a million dollars. Whenever it's the most propitious time to announce it so you can get other people to come along, let me know and I'll send you the money." I said, "I.A., haven't you done enough? You've done so many things for us here, and I don't want you to think you're in a shell game." He said, "Oh, I know I'm in a shell game with you guys, but it doesn't bother me. I'll use my own shells." He was that kind of a fellow. He told me once, and this perhaps summarizes him better than anybody else, he said, "You know, it's only money. If an angel appeared to me tonight and said 'Your twenty-fifth granddaughter is (the Lewis one) sick, and she won't get better unless you give up your house in Florida, your house in St. Paul, your airplane, your yacht, she won't get better.'" He said, "I wouldn't hesitate five seconds. I'd give them all up. I was the youngest of thirteen children, and I started with nothing. I was pretty lucky and worked hard." And he said, "It's only money, and it's only good if you give it away for good purposes."