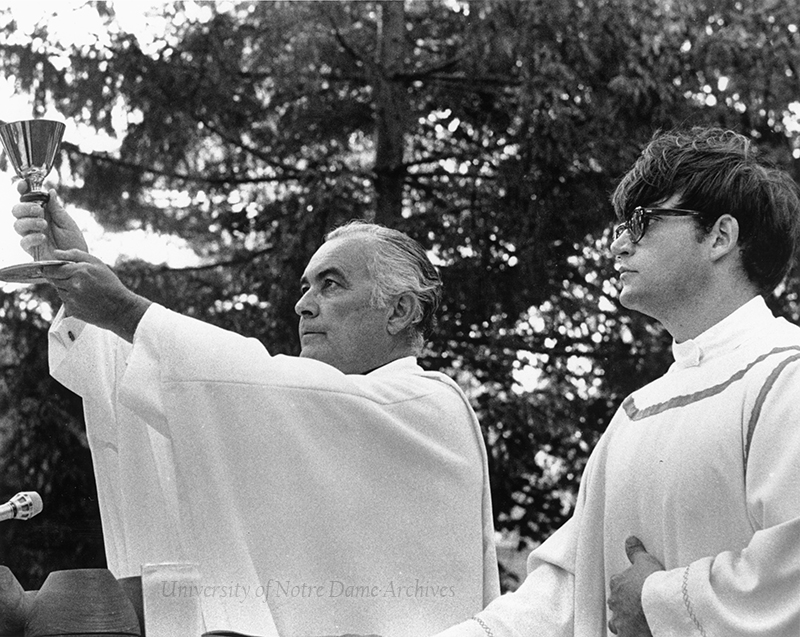 Caption
Rev. Theodore Hesburgh, C.S.C., as principal celebrant at an outdoor Mass for students on the Main Quad of the Notre Dame campus, c. 1977.
Source: University of Notre Dame Archives.

"In prayer and meditation we can find the tranquility and the transforming power of the presence of God. Union with God is, ultimately, the only basis on which our community with others can rest." - Father Hesburgh

Though in many ways progressive in his thinking, and a strong advocate of the changes in the Church that came with the Second Vatican Council, Father Hesburgh maintained a traditional prayer life. Traditional practices included memorizing the Baltimore Catechism, attending Mass daily, and praying the rosary.

As a child, he attended and served as an altar boy at Mass, which was in Latin. Of course, after his ordination, he would say the Mass in Latin for the next 21 years, although he much preferred the change in the Church's vernacular to English that came with Vatican II.

His favorite prayer was "Veni, Sancte Spiritus," or "Come, Holy Spirit." Father Hesburgh began and ended each day with this simple prayer. Once Father Hesburgh became president of Notre Dame, he always seemed to have an overwhelming number of appointments to attend and tasks to complete, but he often remarked that he could only accomplished these tasks with the aid of the Holy Spirit. He reflected in his autobiography,

The real secret to handling the demands upon you is possessing inner peace. No matter what the problems, the tensions, the pressures, one can only help oneself by thinking clearly and acting calmly and resolutely. This cannot be done without inner peace, born of prayer, especially to the Holy Spirit, in search of light, inspiration, and courage. I have a simple three-word prayer that has served me well for many, many years: "Come, Holy Spirit." It has never failed me.

Father Hesburgh's open-door policy as University president (and later, President Emeritus) was not merely for academic concerns, but also for spiritual guidance. He was always open to counsel, bless, and pray with those who sought his aid. He took his role as priest seriously no matter where he was, and he felt it important to wear his priestly Roman collar while traveling so that those in need would know to seek him out. He once reflected,

I've never passed up a chance to be a priest and anything that might involve. It often involved counseling, or talking to people, or helping people in the unique way that you can as a priest, sacramentally or otherwise. I think that's the common thread that kept me going, and I simply cannot view my life apart from being a priest, whether it's my past life or my future life. I don't really want to be anything else.

In his vocation as a priest, he found Our Lady's presence to be a great comfort and inspiration. As a student at Notre Dame, and later as a priest on campus, he visited the Grotto almost daily. The beloved Grotto of Our Lady of Lourdes is a beautiful replica of the one in France, where Our Lady appeared to St. Bernadette in 1858. Father Hesburgh believed that Our Lady was very much present at Notre Dame, and the Grotto was a daily reminder to seek her intercession.

It was not unusual to see Father Hesburgh at the Grotto in the early morning hours before heading back to Corby Hall to sleep. He kept late hours as many university students did. A fellow Holy Cross priest, Father Robert Griffin, C.S.C., who was also a night owl, recalled occasionally seeing Father Hesburgh praying at the Grotto while he walked his dog at three o'clock in the morning.

Father Hesburgh often spoke of Our Lady, with whom he developed a close relationship. When he was chaplain of Vetville in the 1940s, he encouraged the young mothers to bring the (baby) "carriage brigade" to visit Mary at the Grotto on their daily walks to the post office. And he recommended that the young families pray the daily rosary together whenever possible. When he spoke to students throughout the years, he would recommend that they turn to Our Lady as their heavenly mother.

Mass and the Divine Office

Father Hesburgh routinely prayed the Divine Office, the ancient prayers of the Church. The Office is a way to unite oneself with the Church, throughout the world, with set prayers, psalms, and intercessions, it is "a meditative dialogue on the mystery of Christ, using scripture and prayer." This practice is meant to complement the daily celebration of the Eucharist, which Father Hesburgh offered every day of his priestly life. He considered the Mass to be the most important prayer, so it was the central part of his day. Father Doyle reflected on his friend's life, "To see Father Ted preside and preach at Mass was inspiring. The Mass was at the center of his interior life and it is from this amazing interior life that we saw so much goodness flow."

It would seem Father Hesburgh's day was so full of prayer that he could do little else, yet he was able to accomplish a great many things. He saw prayer as key to union with God and a better understanding of oneself and one's role in the world. His belief was that prayer and service go hand in hand, and one couldn't live a good Christian life with one and not the other.

Excerpt from Fr. Hesburgh's Oral History Interviews
Fr. Hesburgh wonders whether he has any effect on his non-religious friends and concludes he must pray for them every day

It's amazing to me how many of my friends, and good friends, either aren't Catholic or if they're Protestant they don't have all that much religion. Sometime I wonder if I have any effect on them. I know I do on some, because some of my dear friends have become Catholic, not necessarily because of me, because I think you become Catholic because of God's grace. I do have an awful lot of friends, and some of my very best friends who are not very religious, who are not Catholic, or maybe Jewish, or who are in any event secular, I'd have to say that. In fact, if you had to add up all my friends, they are probably five to one secular. Yet it's always worried me, how do I hang around with these people, which I have to, because through my life on these various committees and commissions I've been on, I'm almost always the only Catholic on the thing, the first Catholic this and the first Catholic that. I guess the only answer to that is that if you say your breviary every day, and say Mass every day, and say your rosary every day, and a few other things that you're supposed to do like examination of conscience, et cetera. Maybe you can still keep up your religious spirit while engaging in what is very secular activity. As I said earlier, the possibility of daily Mass is probably the biggest influence of all.